Don’t Play the Over/Under – Balance is the Key

This is something I have been eager to write about because it is something that I myself have struggled with in the past.

All of these questions are very common among endurance athletes of all experience levels. Being that I live in an area that only has 2 seasons (can you say hot and humid), I have to be extra careful about my fluid and electrolyte intake.  When you get wrapped up in an intense workout or race, it is easy to forget about your nutrition and hydration. It is something that needs to be practiced and dialed in during the duration of your training leading up to a big event. Practice does NOT make perfect. PERFECT practice makes perfect. 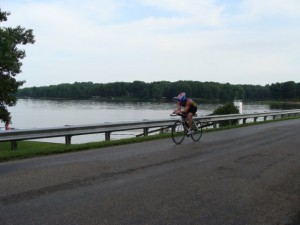 Now in order to give you an idea of how NOT to play the Over/Under game, I am going to “Terintino” it back to a race I did last year.

I went up to Effingham, IL for a Half Iron distance triathlon.  I was feeling great and had trained hard and smart coming into the race. The day before the race my buddy and I did a little spin and a short swim to stay loose. The weather was perfect, a lot cooler and less humid than Memphis. However, going back to the hotel the night before the race, a warm front came through and brought rain and a blazing 93-degree sun along with it.

I don’t know if you have ever been to Effingham but it is pretty flat. Mostly farms, which means very few trees and very little shade.

Fast-forwarding here, it was blazing hot and humid the morning of the race. The water was so warm they deemed wetsuits illegal.

After setting up my transition area and walking to the water, we were quickly sent off with a quick blast of a bullhorn.  I put down a decent swim time (for me anyways) and ended up about 30th out of the water. Not the best spot to be in but it was now my time to shine.

I ran up the hill to the transition area and had had my shoes and helmet on in a flash, setting out on the bike course.  My buddy, being a more talented swimmer than me, was already out on the course and smoking the bike leg. I mashed the pedals and even had a fairly easy time with the few hills on the course. I averaged 25 mph for the first 46 miles of the bike leg, going from 30th out of the water to 5th place overall.

During the bike leg I put down 6 bottles of fluids, 2 being Gatorade and 4 being water. I also downed an entire flask (5 servings) of Hammer Gel.

Around mile 46 my quads started to cramp.  Panicked, I drank more water. The cramping got worse over the last 10 miles and got so bad that when I went to dismount my bike I had to hop on one leg and nearly dropped my bike. After putting my bike up, I drank some more water in the transition area in hopes the cramping would stop.  I 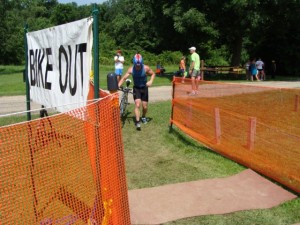 sat there for 5 minutes trying to stop cramping, watching some others come in and leave the transition area to go out on the run.

This is where stupidity meets determined. I just told myself that I was going to finish and that was it.  I set out on the run and never managed to make it more than a quarter mile without cramping. I grabbed 2 cups of fluids at every aid station, as well as any solid food I could manage to swallow.

At this point I noticed a large number of people walking. I also found out that my buddy had a 1-minute lead coming into the transition area, and got 1 mile in on the run and collapsed in a ditch. My shoes were shooting water like a sprinkler on every step. The black top was sticking to the soles of my shoes, making them heavier and heavier. Just the icing on the cake when you are already having trouble lifting your legs.

After walking the entire 13.1 miles I went into the aid station to cool off.  I chugged 2 bottles of water, a soda and ate a piece of pizza, thinking I was fine.

When I went to change my clothes I noticed the cramps were not going away and in fact they were getting more intense.  When I attempted to get into the car my legs locked up and I immediately jumped back out and downed some more water …. and that was when the wheels fell off.

I started to feel extremely dizzy. I yelled to my buddy, who had recovered from his own battle with hydration, to go get the ambulance because I was about to drop.  The race director zoomed over to me on his scooter and as soon as I leaned over to support myself on the scooter…BOOOOOOM! Projectile vomit.

Two people grabbed me as I was headed toward the concrete and by that time the ambulance was next to me.  I sat on the back of the ambulance throwing up and drinking water for about 10 minutes.  I had ice packs on every major vain on my body.  They offered to bring me to the ER for fluids but I declined…stupid.

The cramps got less intense so I said I felt ok and I got in the car without locking up.  We stopped and got some Gatorade at a gas station and started the 8-hour drive home.  About 20 minutes into the ride I started locking up again and felt dizzy.  I got out on the side of the interstate feeling like the vomit fest was about to commence.  Thinking I was going to drop again, we called another ambulance.  For the sake of time, and to save some dignity, I will just say I started feeling better and declined the ride to the ER again.  Enough said. Well another 10 minutes down the road I finally turned to my buddy and asked him to take me to the nearest ER.

I was admitted into the smallest ER I have ever seen; only having room for about 5 people.

I was lucky enough not to have to wait and they slapped me up on a bed, drove an IV into my arm, took my blood, and I started the 4 hour process of getting fluids (primarily sodium) pumped back into my body.  It would have only taken 2 hours, but the doctor deemed that one bag was not enough. What they don’t tell you is that during bouts of severe hyponatremia, you are basically flaunting with suffering seizures, going into coma, or meeting your maker.

While being filled up, I had the urge to pee, finally. They handed me a little jug and with what little dignity I had left, I used the bathroom in the corner…. but into the jug. My urine was a nice burnt orange color, resembling a mixture of Orange Hi-C and the unforgettable Ecto Cooler (look it up, it’s green). I even started to get my appetite back and downed a good amount of food while the last bag was finishing up. 4 hours later I was good as new. And still hungry.

Now, the question is, what the heck happened!?

I was seemingly putting in plenty of fluids into my body. 6 bottles of fluid on a 2.5 hour ride is normally plenty. However, I had all the symptoms of being dehydrated. It only takes about a 3% drop in body weight due to fluid loss to drastically affect your performance. Knowing that, as soon as I felt the slightest cramp coming on I started pounding water like there was a time bonus for who could drink the most. It seemed like the more I drank, the worse things got. I played the over and lost it all.

According to researchers, the average person only needs about a half a liter of water per hour to replenish their fluids….in normal conditions. 93 degrees on fresh blacktop was not normal.

Truthfully, it is best to find your own rate of fluid loss during your training. The easiest way is to weigh yourself before and after a shorter (around an hour) workout and the amount of weight loss would be your rate of fluid loss. You would want to make sure you test this during the hotter and colder months since your fluid loss would differ greatly in the different temperatures.

Now we all know the consequences of not taking in enough water.  Most of us have been there before to some degree.  But what about when we take in too much water?

When we sweat, we can lose up to 4 grams (that’s 4000 mg) of sodium per hour. If not replenished, we can suffer from hyponatremia, which is a low concentration of serum sodium in the blood.

The side effects are similar to dehydration, but can be much more severe. If we just totally disregard sodium replenishment, hyponatremia is almost certain in exercise lasting 5 hours or more. However, even if we are consciously replenishing our sodium, we can still dilute the serum sodium concentration in our blood by taking in too much water.

Measure that out and see if you would like to drop that in your mouth. Probably not.

So in order to take in enough sodium, we need to supplement our intake with higher sodium drinks, solid food, and sodium supplements like SweatSalt capsules. If you are a gel junkie, start incorporating some salty alternatives into your training. This might go against the sport nutritionist code of conduct, but Paydays and Snickers make great riding food and have a good amount of sodium in them.  Mix your sports drinks a little stronger (as long as it agrees with your gut), and possibly carry extra in your pocket to mix later.

Keep in mind that these are just suggestions and the figures are generalized based on the athletes in the study. I am a firm believer that one size DOES NOT fit all.

You need to figure out what works best for you and what your own rate of fluid loss requires. This should all be tested during the early parts of your base training when you have the highest training volume and continuously during your training program so that on your big day you have everything dialed in.

You can train as hard as you want but if you forget about hydration and sodium replenishment, the engine on your well-oiled machine can quickly seize up.

On a final note, in my defense, the weather snuck up on everyone that day. 50% of the entire field DNF’ed.

If you’d like to figure out your electrolyte needs and avoid situations like this, check out our Precision Hydration Testing Service and line of multi-strength sports drinks.