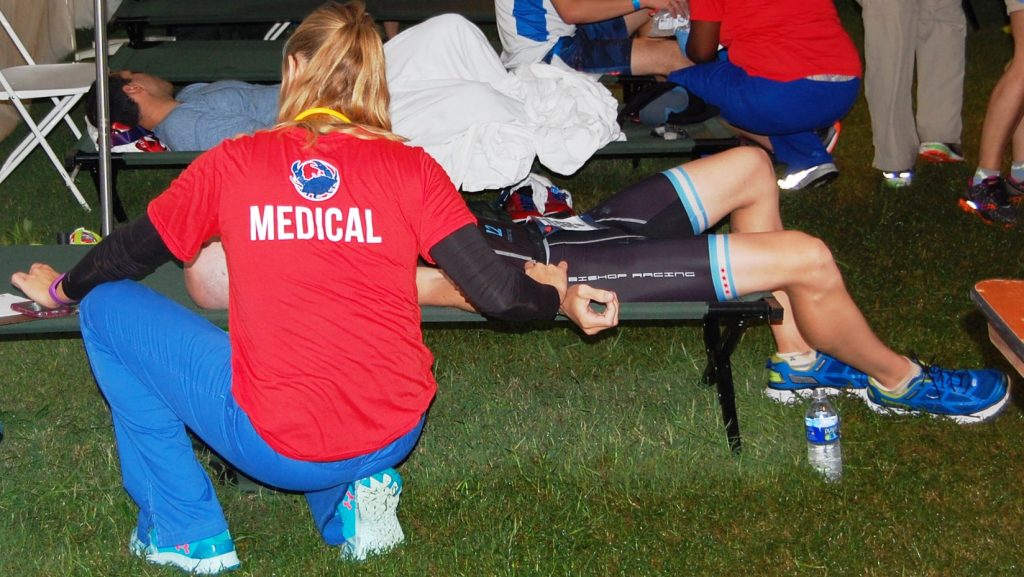 As the popularity of long endurance events grows, and the science of hydration expands, the main hydration concern seems to be moving slowly away from typical dehydration (excessive fluid loss) and onto exercise associated hyponatrmeia (which I will now refer to from this point on as EAH in order to prevent my hands from cramping).

What is EAH? The medical definition is blood sodium levels below 135 mmol. Normal levels are accepted to be 135-145 mmol, so you can see there can be differing degrees of EAH. My goal is to keep this pretty straight forward so I’ll spare you with all the really detailed sciencey bits and numbers.

How does this typically happen? Generally speaking, most endurance athletes get EAH from consuming too much water, which dilutes the total sodium in their body. But at the same time, this can also happen by having high net sodium losses and consuming sports drinks that are a much lower concentration than your sweat. You are basically running a sodium deficit long enough to throw off the balance in the blood stream. For example, if you are losing 1000 mg/L in your sweat (which is average based on our testing), sweating 1L per hour (a fairly modest sweat rate for heat acclimated athletes), but drinking one L of fluid that only contains 500 mg of sodium (that’s generous for big brand drinks) in that same hour, you are net -500 mg in that hour even though your net fluid gain/loss was zero. That may not catch up with you in one, two, or maybe even three hours, but sweat losses are not a constant and the average person can only absorb about 1L of fluid an hour. Play with the math and you can see how the net sodium losses can easily add up!

Why is sodium so dang important? I know. You’ve heard for years how bad sodium is for you. In excess, anything is bad for you. Water included. Hell, too much oxygen can kill you. Sodium is the predominant electrolyte in your extracellular fluid. It carries an electrical charge that helps pass impulses to the nerves, telling muscles and organs to do their damn job. Even more importantly sodium helps maintain proper fluid (and ultimately blood) levels in the body. Not to mention aiding in a number of organ processes like digestion.

What are the symptoms of Mild EAH? Once your sodium levels drop below 135 mmol, you will likely still have normal vitals (which is why it’s often misdiagnosed), but you may experience things like light headedness, nausea, cramping, and possibly even weight gain. These are not performance enhancing symptoms by any means.

The scary bit. What are the symptoms of severe EAH? Not trying to scare you, but there have been a few confirmed deaths in the last few decades due to EAH, including one at Ironman Frankfurt in 2015. See, once your blood sodium levels are really low (meaning too much water in the blood), your body will shift water from the extracellular fluid to intracellular compartments to attempt to balance everything back out. This causes swelling in the brain that can ultimately cause a herniation of the brain stem, or other brain damage. Not good at all. The less scary symptoms include severe cramping (the total body kind), headaches, vomiting, an altered mental state, heart arrhythmias, seizures…do I even need to keep going?

Who is most at risk for EAH? Here’s what you really came to find out. Are you at risk? Well in the right (or wrong) conditions, any athlete can be at risk. But here are a few groups who could be more at risk than others:

How do I protect myself from this dreaded acronym?

As bad as it sounds, EAH isn’t all that tough to combat with the right approach. Here are our recommendations for staying hydrated and keeping your electrolytes in proper balance.

There you have it. As scary as EAH can sound, it’s not a big deal with the right approach. If you have any questions for us, don’t be afraid to contact us or click the intercom in the bottom right of the screen.

Dale is Co-Founder of BPC and has been coaching athletes of all ages, ability levels, and sporting backgrounds for over 10 years. Dale has been certified through just about every USA governing body, and is a biomechanics nut. To learn more about Dale, check out our coaches page.